Analysis of the findings of studies that measure the different dimensions of religiosity promotes our understanding of the nature of religion but shows that the measurability itself is a complicated task.

Thus, a measure of religiosity on a certain dimension is not necessarily correlated with the measure on another dimension. This increases the difficulty to compare the religiosity of two individuals or groups in an attempt to determine which one is more religious. END_OF_DOCUMENT_TOKEN_TO_BE_REPLACED 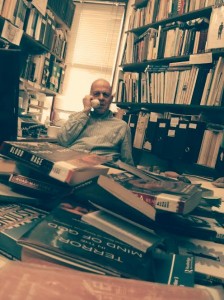 The theoretical core of the essay addresses the issue of the measurability of religiosity. It supports the recent claim that religion in general and religious extremism in particular, is not so much a matter of belief or experience but rather it is essentially a matter of performance of the self and the group. It then argues that advancing our understanding of religious extremism requires turning the spotlight from a performance oriented towards religion’s environment to religious inward-facing performance. END_OF_DOCUMENT_TOKEN_TO_BE_REPLACED